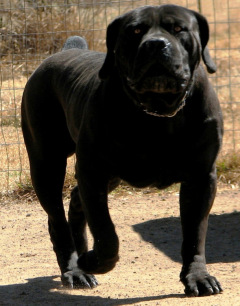 By Lukas van Vuuren
(This article was written +-2003. Since then the Black Boerboel was accepted and the numbers of black Boerboels have now increased to the point where the danger of losing the black dog is no more a threat. Recently there were a few people that did their best to spread lies and sow mistrust in the black dog and the black dog breeders. Fortunately DNA tests, scientific facts and common sence prevailed and the acceptance and popularity of the black Boerboel increased.Thank you to everyone that did their part to assure the future of this colour for the Boerboel breed. I also want to use this opportunity to discourage people to breed black dogs just for the colour or rarity of it. Rather breed the best Boerboel possible, irrespective of colour. By breeding an inferior black dog, you are doing the black Boerboel more harm than good.)

This popularity of the black dog in those years could in part be ascribed to good breeders concentrating on black dogs and therefore the progeny of his dogs would dominate in that area. What is very important though is that the local indigenous population had a very deep rooted fear of black dogs because of ancestral beliefs. To this day the black guard dog is very important to the remote farmers that are prone to farm attacks. In areas in South Africa where farms are under constant surveillance by bands of would be attackers, black dogs is not a luxury, but a life saving necessity.
Throughout the world the black color is the most popular color for a guard dog. The obvious benefit of the fact that you cannot see the black dog at night makes it the logical color for a guard dog. Breeds like the German shepherd, Rottweiler, Doberman, etc, illustrate this point.

Documentary evidence
The fact that there was an abundance of black Boerboels around, is amply documented. A few photos that I have seen, confirm this. Many of us that grew up with Boerboels, knew the pre-1983 black dogs first hand. In the SABT “Boerboel News Letter” of November 1997, on page 2, there is an article on black Boerboels. The article states: “from the Southern Free State up to the far Northern Transvaal, black Boerboels … were a common sight.” (Translated) The article states further that in 1983 (at the founding of the SABT) the black Boerboel was not included because of the fear that the then popular Rottweiler would have been used to cross-breed with the black Boerboel.

Motivation for excluding black from the original SABT breed standard
When the SABT had to formulate a Breed Standard in 1983 the black dog was omitted due to the aforementioned fear of the infusion of genes belonging to other breeds. One of the people involved in this process put it this way: “The black dog was not included because of personal preferences.” It was probable that both these factors played a role in this highly unfortunate decision. Whatever the reasons, the consequence was that for the time between 1983 and 2002, the Boerboel had to go without the black color that was a natural part of the Boerboel inheritance.

Recognition and registration
Reluctance to change standards – Any breed society is always reluctant to change their standards. That is understandable and is necessary to achieve constant improvement and uniformity in the breed. If any changes are made in order to accommodate breeders that want to sell something
that is suddenly popular, you will surely harm your breed. However in the case of the black Boerboel it will not be a “mod fad” that will be accommodated but an integral part of the breed that was wrongfully omitted.

Inevitability of the Black Boerbeol being registered

There is no doubt that eventually the black Boerboel will be registered. Whether that will happen this year or next or whenever I do not know, but the facts are overwhelmingly in favor of recognition. Lately I have seen a strong swing towards recognition of the black dog. The problem remains that people are always skeptical of something that they are not a part of. Since I started with
registered Boerboels I went throughout South Africa to find real black Boerboels. I have bought eighteen so called black Boerboels, either unseen or as puppies, before I got the first one that
was a real Boerboel.

Black dogs at the HBSA
At the 2003 AGM of the HBSA two black dogs were brought up for discussion and appraisal. They were owned by Mr Dirk van der Merwe from Hoopstad and his son in law Jaco Claassens. Because they were not members of any breed organization, the dogs were entered in the development register of the HBSA under the name of a friend Mr Jan Muller. From there the prefix “Muller”. Mr van der Merwe later gave me these two dogs, Muller Lady and Muller Poppie.

Request to the SABT

Quality of Black dogs
The quality of the black Boerboel compares very favorably with the rest of the Boerboel population. Because the black dogs I know of at this moment are still 100% farm dogs, they tend to look more like the working dogs of 20 years ago. That usually means an athletic dog slightly higher on the leg and less muscled than the present day high scoring Boerboel. It is my opinion that they will fit into the top 40% of the Boerboel population. I am only familiar with the black dogs in the Free State and Eastern Cape. I know there are others that I have not seen.

Standard dogs producing Black pups
From time to time I get calls from people that had black pups in a litter. These pups were never registered before and were lost to the breed. In future they will hopefully be registered and will help to perpetuate the black Boerboel. They will off course represent the current breeding trends in the breed. Because all the black dogs to my knowledge so far has always had at least one brown parent there is really no noteworthy difference between the black dogs and the rest.

Advantages of black dogs
The overwhelming advantage of the black dog is of course the fact that you could not see him at night. The advantage of the great fear that some people have of black dogs was mentioned as well. What has not been mentioned is the beautiful shiny black coat. There are few dogs that could really look as beautiful as a healthy active black dog with short shiny hair.

Importance of pigmentation
In the African sun, pigmentation is very important. Breeders are always trying to improve the skin pigmentation of their dogs to prevent sunburn on the nose etc. In the black dog that is of course not a problem. The skin is totally pigmented except where you find a white spot that sometimes goes as deep as the skin itself.

Black hair not absorbing heat from the sun
Some people are concerned that the black dog will absorb too much heat from the sun. Research was done by a society breeding cattle with black hair coloring, and it was found that the short shiny hair was more important than the color of the hair. It is logical to assume that the heat absorbsion of a dark brindle or brown dog will differ very little from that of a black dog.

Importance of recognizing the black dog
Whether any Boerboel breeder intends breeding with the black dogs or not, it is very important that we unite our efforts to get the black dog recognized and registered and thereby assuring the future of the black Boerboel. This matter is in the hands of the present active Boerboel breeders, and it is our responsibility to preserve that which is within our power to preserve. We still have the last few individuals available of the black dogs that were nearly lost forever due to a mistake in 1983. We now have the opportunity to rectify our past mistakes and preserve the wonderful black Boerboel for generations to come.

In November 2008 the SABT recognized the black Boerboel. This very positive development will be a boost for the Boerboel breed, but especially for the Black Boerboel. Although it is 25 years overdue, it is nevertheless a matter of rather late than never. All other organizations have approved the Black Boerboel prior to this date.

If you have any queries or wish to make an appointment, please contact us on:

Get social with us!

Keep up to date with Noxterra News as it happens

Simply fill in the below section with your details and our "Noxterra Newsletter" will be sent to you regularly.

PIC OF THE WEEK